YMCA Menu
YMCA 175th Birthday Event- Thanks for the memories

YMCA Lakeside 175 Event – Thanks for the Memories! 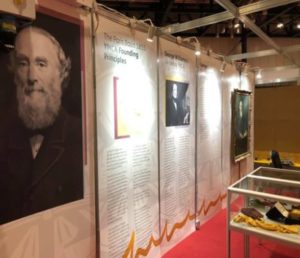 Thanks to everybody who attended the 175 Heritage Roadshow this week at YMCA Lakeside.

Our many visitors certainly helped to bring the exhibition to life, and we were thrilled with the feedback.

Whist the Roadshow offered visitors the chance to explore some little- known facts about the worldwide YMCA movement, visitors were also thrilled to see the new accommodation at Lakeside, the £6.8m Stoller Campus.

Featuring details of the YMCA’s contribution to World War 1- and World War 2, we were also joined by Ian Gee who gave a fascinating presentation about the industrial heritage of Lake Windermere, as the birthplace of “Waterbird,“ the world’s first sea-plane.

The TV cameras were also here to film local schools enjoying the Roadshow- and trying their hand at basketball- a game that was in fact invented by the YMCA!

Special thanks go to Leven Valley and Langdale CE Primary schools. Their children threw themselves exuberantly into exploring the exhibition and then took part in an outdoor activity – catapulting through the treetops on our King Swing.

Thanks also to all the funders, supporters, industry partners, alumni and general friends of YMCA Lakeside who attended on the evening of Tuesday the 21st. We were delighted with the turnout and this was the chance to meet old friends, including Frank & Lorraine Hunsberger who met whilst working at Lakeside in 1966 and later married.

Steve Berry, a well- known figure amongst former instructor staff brought alongside his collection of Lakeside home movie memorabilia and evocative snaps of Lakeside from yesteryear.

Fylde Coast CEO and President Ian Paterson were rewarded for posterity with their personal stories forming a part of the YMCA Roadshow exhibition.

Lakeside Senior Manager, Steve Scott said, “The 175 has been a phenomenal event and we were so proud to host it. Seeing so many Lakeside supporters turn out made the whole thing quite emotional. The exhibition had the perfect backdrop in our new build Stoller Campus and it’s geared us up for an exciting 12 months ahead.”

Click the link to watch all about it! Click on the images below to get a better look at the celebration!